Learn how to cope when you have a child with celiac disease. Discover common pitfalls, diagnosis symptoms, and tips to make life easier in this transition. 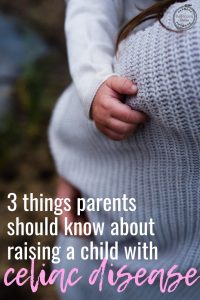 “How do I raise my child with celiac disease to have a normal life?”  That was a question I asked myself after we received this life-changing diagnosis.

The doctor said children with celiac disease live a pretty normal life on a gluten-free diet.  That is a lot to process. Especially since I had never heard of celiac disease or gluten.

Soon, we learned we were just at the beginning of a lifelong change for our entire family.  That journey has led us to our new “normal” life.

Getting a Celiac Diagnosis: Our Story

Getting a diagnosis for a child with celiac disease can be challenging. In my daughter’s case, symptoms were gradual over a two-and-a-half-year time span.  Erin was four years old when we finally got a diagnoses.

Looking back, I can see she started exhibiting symptoms at around 18 months. She began to battle severe constipation, crying out in pain and had blood in her stool.  So, we headed to the doctor.

The doctor treated her symptoms and prescribed a laxative which temporarily fixed her problem. Even on the medication, we would occasionally see blood in her stool and continued to take her to the doctor.  With each visit, we were told the blood is superficial and nothing to worry about.

As she grew older, she was able to vocalize her stomach was hurting. The doctor related her pain and bloody stool to constipation. We were advised to keep her on the laxative and add more fiber to her diet.  So we did, not knowing we were only making matters worse. By the time Erin was three years old, things really started to change.

Gradually, we noticed different things going on.  She was extremely tired and slept more. She developed dark circles under her eyes and her complexion became pale.

However, the one thing that stood out the most was her behavior changed drastically. She became more irritable. It was so bad I remember thinking we skipped the terrible twos and went to the terrible threes.  She became so angry and uncontrollable over the littlest things.

As time passed, this behavior only escalated. She began having episodes where we couldn’t control her. She would scream and cry for long periods of time.

On some occasions, she would have emotional breakdowns she describes today as a “monster living inside me”. She would scream out pleading with us “Calm me down, calm me down!”

Her body was tense and shaking. She would break out in a sweat.  When we tried to comfort her, she would run away. We were at a loss. At her four-year-old yearly checkup, the pediatrician said Erin had not grown or gained any weight since her 3-year-old checkup.

I was concerned, but the pediatrician convinced me everything was fine.  A few months later, we headed back to the doctor because she again had blood in her stool.

Finally, the pediatrician sent us to a gastroenterologist.  He did some blood work and a few days later, my husband received the call.  “Your daughter has celiac disease.”

The gastroenterologist said an endoscopy needed to be done to confirm the blood work.  He assured us that with a change to a gluten free diet, she will live a somewhat normal life.

I was still holding out hope the blood work was wrong and the endoscopy would confirm that.  I started praying the results of her endoscopy would be negative. Her test was scheduled for a Monday morning.

On the Sunday evening before, Erin and I were on our way to church. There was complete silence because my mind was consumed by the upcoming endoscopy the next day.

I was speechless.  My eyes filled with tears and I immediately felt at peace. I knew she was right. That no matter what the outcome, it was going to be okay. As it has turned out, she was right. Just like the gastroenterologist said, with the required dietary changes, our lives have been pretty normal.

What is Celiac Disease?

When someone with celiac disease ingests gluten (a protein found in wheat, barley, rye and contaminated oats), the body starts to attack itself and, in the process, destroys the villi.  When this occurs, they develop a wide range of symptoms that vary in adults and children.

In some cases, celiac disease can be asymptomatic and present with no symptoms at all. The only treatment for celiac is a gluten-free diet. If someone with celiac continues to eat gluten, they become malnourished leading to serious health issues including cancer and sometimes even death.

That is why it is vitally important to anyone with celiac disease to adhere to a strict gluten-free diet. Even the smallest crumb can cause internal damage, even if no symptoms exhibit themselves after ingestion.

The amazing thing is, the body begins to heal itself from the damage when an individual begins a gluten free diet.   Once Erin started her gluten free diet, I saw changes in her immediately. In the first week, she was much calmer and her complexion returned to normal. I was amazed. Routine blood work and additional endoscopies confirmed her body was healing.

3 Lessons Learned from Raising a Child with Celiac Disease

1. Know the symptoms so you can get a diagnosis.

Celiac disease is often underdiagnosed. There are so many varying symptoms of celiac disease that it often presents the same as other health issues.

Young children with celiac disease usually have the typical symptoms like failure to thrive, diarrhea/constipation, abdominal pain, fatigue and irritability.  Just like with Erin, she had all of those classic signs.

Erin’s first onset of constipation and abdominal pain was attributed to her diet by the physicians, so they didn’t investigate further. Erin also exhibited erratic behavior and fatigue.

It was almost on a daily basis she would have an emotional melt down. Our biggest battle always happened after we arrived home around dinner.  Since she was exhausted, she would fall asleep in the car. Whether we would let her sleep and ate dinner without her, or, woke her up to eat with us, she would have a total meltdown. No matter what we did, nothing was right.

So, what I chalked up to “this is what kids do at this age” and “she is so tired because she is in pre-school” was actually so much more. It still pains me as a mother to know I overlooked so much.  She was unable to truly vocalize what was going on with her, making it a challenge.

I had to be the voice for her, not realizing how bad she needed one. I had no idea about celiac disease or the symptoms. Celiac awareness is the key. Know what to look for so you can get an early diagnosis.

2. Do your own research to get the knowledge you need to better care for your child.

Once we got Erin’s diagnosis, I did a ton of research online. I also read books down to the copyright date.  I wanted to make sure I knew everything there is to know about celiac disease and how to raise her in a safe, gluten-free environment.

Even though we consulted with a nutritionist and doctor about celiac disease, it wasn’t enough. There is so much information out there.  With this knowledge, I have not only been able to help her, but I have been able to help others.

Over the years, her diagnosis has helped educate others diagnosed and even help diagnose a member of our family.   Through my research, I learned first degree relatives have an increased chance of having celiac and should be screened regularly, even if they don’t show any signs.

Those facts were never mentioned in detail by the experts.  My newfound knowledge empowers me to do what I have to do to protect my child.

3. Teach your child about celiac in a creative way.

How do you explain celiac disease to a child and keep them safe on a gluten-free diet?  After I did my research and knew what I needed to do, I had a new dilemma. How do I explain this to my four-year-old so that she can understand?

I decided to approach it in a positive way. As I fought hard to hold back my emotions and tears, I excitingly explained to her that the doctors figured out why her belly hurt and how to fix it.

We explained she would have to change some of her favorite foods. Next, we made it into a game in the pantry as she and I cleaned out all of the food containing gluten. Also, we took her on an adventure to the grocery store as we looked for new gluten free food.

Another thing we did was buy numerous children’s books related to children with celiac disease. These books were instrumental in not only explaining celiac in a way she can understand, but also helped me with my next challenge – school.

At the beginning of each school year, we met with her teachers and explained what was needed in order to keep her safe. These books helped make it easy for the teachers to understand the disease and what to do when she was under their care.

Having a child with celiac disease poses new challenges as she gets older. As a family, we are all adjusting with each phase of her life.

My goal from the beginning has been for her to have a normal life and not be held back or labeled by celiac disease.  Erin is now 15 years old and doesn’t know a life without celiac disease.

For the most part, her life is “normal.” She is a straight-A student and plays soccer for her high school and competitive soccer team.  I have striven really hard to teach her how to live gluten-free and maintain a “normal” lifestyle. It has become so much a part of her, she doesn’t really focus on her celiac.

Recently, she was talking about people with allergies and how hard it would be for someone to be restricted from certain foods.  That statement caught me by surprise. But, then she stopped and thought about what she said and then realized “Hey, I am one of those people.”

To me, that statement alone has validated I have done my job. Erin feels “normal.”

Crystal Cantrell lives with in Mount Olive, Alabama with her husband and 2 daughters.  She works full time and enjoys spending time with her family.